Why Kids Think They’re Stupid (The Power of Self-Perception)

More than ever, otherwise intellectually capable students, believe they are stupid.

Whether you’re a parent, a friend, a relative or a teacher, we’ve all met that kid who thinks they’re just not as smart as everyone else. What scares me, is that some of you will laugh and agree.

I’m not naive to the fact that some students aren’t as cognitively developed as others. The problem is that we overblow how common this occurs. See, the reality is that 9 times out of 10, it isn’t an intellectual issue, it’s an emotional issue.

If you don’t believe me, I’ll use a common example of a child’s reasoning for how smart they are (forgive my average flow chart). 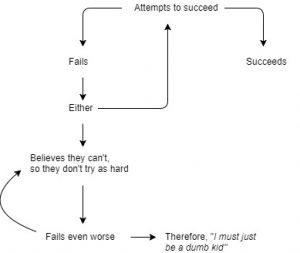 The crazy thing about this way of thinking is that it’s all in the mind. Essentially, it could have been 1000’s of variables that caused the original failure, but that outcome can cause long-term issues with self-confidence.

I’m not saying failure is bad. On the contrary, our ability to deal with failure determines who succeeds and who doesn’t.

We incorrectly assume hundreds of thousands of kids to not be as bright as others, because they believe themselves to be so. Without intervention, the lack of effort will inevitably lead to low success at school, and in their mental health.

But, here is the light at the end of the tunnel. If you have someone else prove to the student that they can do at least the simplest task within the content they are learning (whether Math, Chemistry or English) then something interesting happens. Kids who believed they could do nothing, now believe they can do something.

Building on this is how we pull kids out from the self-deprecation of their own heads and show them the possibilities they never knew existed.

We're not around right now. But you can send us an email and we'll get back to you, asap.